I had really built Dollywood up in my mind to be much more than an amusement park. I pictured big blond wigs and big boobs everywhere, but I never saw any of that stuff. It is a really cool amusement park, and we had a great time, but it just wasn't what I had expected.

When we walked in the gates, the first thing I saw was a couple of potheads sitting on a bench. I live in California so I know a lot of potheads, but these two were unlike any I had ever seen before. I decided to sit down and see what they were all about. They were pretty cool, so we snapped a picture and took off. 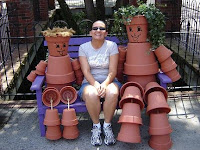 After we left the potheads, I walked around the corner and saw giant veggies. At first I thought it was just me, but Riley assured me he saw them too. We decided to take a picture with them so I would have proof that they actually existed. 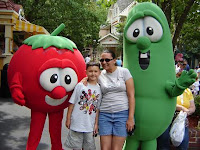 The rest of the day was spent doing all the usual stuff you would do at an amusement park, riding rides, eating a bunch of junk, and then trying to make my kid puke on the spinning rides. They had a ride there that was a smaller version of "Disneyland" teacups. Riley insisted that I spin that thing as hard and fast as I could. We were going so fast that all I could see were colors zooming by. My arms started getting tired, but Riley kept yelling "don't stop spinning". Ok, anything for the kid. When we got off, Riley got green and I thought for sure he was going to blow chunks right there all over the ride operator. I was getting ready to m 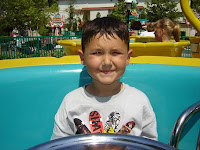 ake a run for it, but thankfully he kept everything down and we moved on.

It was a fun day, even without the blond wigs and big boobs!

That's really funny. Years ago my wife and I took our kids to Disney Land, and we did the Tea Cups. Same story. Never again! The Tea Cups that is.

Glad you had a good time. A Blonde with big booobs would have been nice to see though. You could have shared pics of that!

I could care less about the blond wigs, but I'd have been just fine with the big boobs.

I'm sure you're shocked.

We've got our share of potheads back East too. There just like, er, ah, huh, huh, different...or something.

Yeah, I always get sick at tea parties. Had to sit through many to get to the host's crumpets when I was younger.

What the heck. I figured all the staff in the entire joint would be wearing blonde wigs and gratuitously endowed...what a shame.

I once read that Dolly and her asistant used to run through the fields naked after a concert.
My head hurt for a week just thinking about it.

Potheads, heh, heh...I know lots of potheads all over the country...god bless 'em.

Sounds like Dollywood was a blast. I would expect more boobs, too though.

Teacups never bothered me. In fact, my other fav's were the tilt a whirl, scrambler, the Spider, and something guaranteed to make you puke your lunch, the Zipper! I would spin myself around when I was a kid, till I couldn't stand up anymore. My dad said it was the only way the world seemed right to me. Ha! I liked that argument. Glad you had a great time! Memories like those last a lifetime.