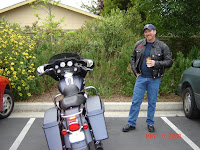 I fell asleep last night looking forward to today. It's Dave's birthday and we (okay I) decided we needed to celebrate. So we thought a ride would be a great way to spend the day. Yeah! It's settled.


I woke up to fog and cold this morning. Bummer. I really wanted to ride to Big Sur. Shucks! Okay...I'm over it...time for plan B. I had to drive to Santa Cruz first thing to drop some kids off, so we decided Dave could just ride the bike up and meet me there and we could figure out what to do next. It might still be cold, but it wouldn't be as bad as riding the coast. As I was sitting there waiting for Dave (I said 9, he heard 9:30, but it's his birthday so I'll give him this one) I was thinking how cold it was and hoping the fog would burn off by the time he got there. Well it didn't. He told me it was pretty cold but I was determined that as long as he was okay with it I would be. We took off on Highway 1 and then up Highway 9 through the Santa Cruz Mountains. It was cold, but the fog was high up so there wasn't any mist, and thankfully there was no wind. I could hang for awhile. 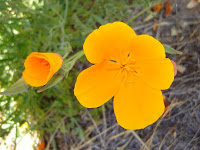 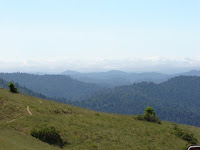 The scenery was beautiful, redwoods everywhere. I tried to get some pictures but I don't think any of them could do the views any justice. By the time we got up to Ben Lomand I started to see some blue sky, and once we got to Boulder Creek there was nothing but sunshine. 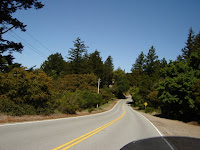 After that point I really have no idea what roads or towns we went on or through, I was just really enjoying myself and taking in my environment. I love the way the mountains smell, and sound...okay the sound was the bike, but I still love it.
Dave informed me that we would be eating at the "world famous" Alice's restaurant. 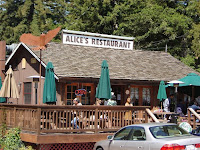 Okay, sounds good, but I've never heard of it. I guess there was a song written about it. I seem to remember him saying something about it being a folk song? I'm not sure if at some point in our acquaintance he misinterpreted something and thought I listened to folk music.... Anyways, the slogan is "You can get anything you want at Alice's." Some of the wait staff were getting pretty friendly, so I think that maybe you really could get anything you wanted. Sorry, just an observation. 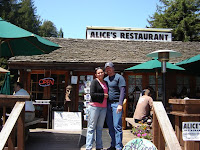 The food was excellent and the setting was peaceful and relaxing. After we ate we hung out for a little bit and then decided we'd better get headed back. The ride back to Santa Cruz was perfect. I have to say though that the road was the curviest I have ever traveled on a bike, there were a couple of times I got a little nervous. It isn't that I don't have confidence in Dave's maneuvering abilities, but the cars coming in the other direction freak me out, you never know when someone is going to take one of those corners too fast and end up in your lane. Plus there were quite a few bicyclists riding on the sides of the roads so cars were trying to go around them and that is always scary. But Dave got me back to Santa Cruz without incident. 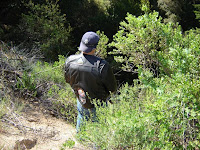 All in all it was a great day. I'm glad Dave had a birthday. Is anybody having a birthday tomorrow we could celebrate? Aw, who cares let's celebrate anyways.

Looks like a great way to spend any Birthday. I likes seeing that Dave is doing all he can to help the environment by watering the bushes! Oh well, it was his Birthday, he can do whatever he wants, right? LOL! Thanks for sharing, and I hope your out of the dog house soon for spilling the beans! Lady R

P.S. I had to laugh when Dave wrote, "he had a bone to pick with BB." Every man SHOULD have his bone picked on his birthday, don't ya think? LOL!

Spending the day riding with a great woman to share it with. Sounds like a good birthday to me.

And yes Lady-R, a man should have his bone picked ESPECIALLY on his birthday.

Fact Spoiler from Mass-hole: The real "Alice's Restaurant," referenced in the classic Arlo Guthrie folk song is in Stockbridge, Massachusetts, where the events in the song took place in 1965. Today, it is called "Theresa's Stockbridge Cafe." I don't know if you can get anything you want there, but should I find out, I'll let ya know!

Kung Fu note to Dave: It is forbidden to piss against the wind.

Joker...LOL! I don't know how much help I'll be. Harley still complains that I don't ride my Harley ENOUGH! I just wink and tell him to get the keys! Lady R ;D

Sounds like a great birthday ride!! I'm loving the pics too!!! :)

Well, I'll have to kepp the "birthday bone picking" details to myself..don't want to blow up anyone's hard drive. ;)

Joker- I guess we'll just have to come out there and we can all go and see exactly what we can get.

"It is forbidden to piss against the wind" Bec adds, "Especially if your woman is standing next to you."

Sounds like a perfect day. Glad you both had fun.

Happy Birthday Peeeee! Alices is a place I like to ride to. Its a nice ride and close enough to have a little day. You can pick a bone there too if ya wanna!

Yup, it's nice to see that our Dave is making his mark in the world, or at least the woods.

Lol, I knew I was surrounded by crazy people. Thanks B.B. for the day. And here I thought we were going to THE Alice's Restaurant. Dang, now we are going to have to ride all the way to MASS.

I could not have had a better b-day. It was nice, so nice I can't wait for the next one.

It was a good birthday,...and wasser mates!

Hey, b.b., found your blog through LadyR's blog, and thought I'd stop by.

I guess only Joker and I (both being Mass-holes) know about Alice's Restaurant. Although I didn't realize it was still operating as Theresa's.

Thanks all for your comments, it was an awsome day!

Ann- glad you found me. I had never even heard of Alice's, but Dave is right, now I guess we'll have to take a ride east.

"Wasser mates" Wow, I haven't heard that term since I was in college almost 20 years ago.

Lady R, don't worry, I had to ask Dave what it meant. :) He says it means "taking a piss" in Australia.

Great post B.B. I'm ashamed to say I've forgotten to link to your blog. I'll rectify that as soon as I stop typing this.

Wasser Mates......never heard that one either.....shaking hands with the unemployed is one I like to use.....or going to get ahold of myself....

Now here it was his birthday and you didn't take any photos of you giving him a birthday whoopin'.

Oh I can't wait till you come for a visit. We'll certainly have to meet ma'am.

Ronman- Sorry..no pictures of the whoopin'.
I will be in LaVergne June 16-26. It would be fun if we could get together for lunch, or a beer.